Ramblings of a First Time Mother 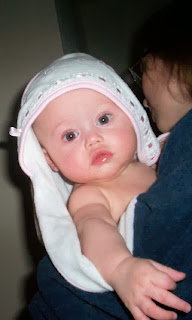 When I was a little girl, I had a baby doll; it was one of those real life baby dolls that, as the name would suggest, looked like a real baby. His name was Baby Jason, not just Jason, but Baby Jason. I don't remember much about the time I spent with Baby Jason. I know that I would carry him around with me from time to time, and sometimes he would go for a ride in my Wilma mobile (aka my play car that I thought looked like the Flintstone's car and affectionately named accordingly.) Other than that, Baby Jason just hung out in his own little corner until I felt like dragging him out and playing with him. Only the joys of childhood and the bliss of ignorance could make child rearing, let alone baby caring, look so simple.

When I was 23, I had a real baby. Her name is Laila, not Baby Laila, just Laila. Unlike Baby Jason, Laila doesn't just wait for me to be ready to play with her. In fact, Laila doesn't really like to play that much at all, and she doesn't really like to sleep either. Laila likes for me to hold her and sing to her. By the end of the night and after about 50 encores, my voice is sometimes nonexistent.

I have no Wilma mobile to cart her around in, and to be honest, the idea of driving her around in my Escort scares the living day lights out of me.


Baby Jason never cried; Laila does, and it is a production when she does. Laila will grunt and cough and grunt some more before she starts wailing like it is going out of style. The minute I pick Laila up, the crying stops. It's almost like a game to her. She lays in her bassinette trying to predict how many grunts and coughs it will take for me to go over there and pick her up, and I lay in the bed or on the couch or any other somewhat flat surface (because mom's, like beggars, can't be choosers) and try to figure out how much longer I can let her go before she starts to get really angry.


Baby Jason wore a diaper, but I only changed it when I felt like it, and I am sure that was a rarity. Laila loves to have her diaper changed; in fact, I am almost worried about how much she enjoys the prospect of being naked. The moment the onesie starts getting unbuttoned, Laila starts smiling. I don't really mind the diaper changing that much; however, I am somewhat alarmed by the number of times Laila has peed on me and puked on me and, to be completely honest, pooped on me too. I never knew that being a mom meant having all kinds of bodily fluids flung all over you at a moment's notice.


Though it seems rather obvious, I feel the need to state that Laila and Baby Jason are nothing alike. Baby Jason never needed me. There's something rewarding about being a parent and the moment your baby hears your voice, she looks around the room searching for it. And as odd as it might sound, I even like it when someone is holding Laila and she hears my voice and suddenly the only person she wants to hold her is me. Baby Jason was plastic. Laila is eyes that could light up a room, a sideways smile, a bottom lip that she sticks out to pout, a furrowed brow when she is serious, lips puckered in the shape of an "O" when she is listening intently to someone talk, and two rosy cheeks on the sweetest little face that her mommy loves to kiss. 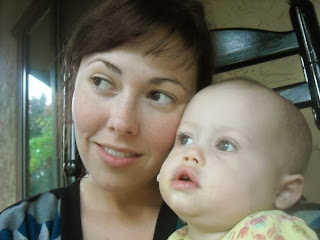 I always thought that being a mom was like being a teacher, in the sense that it was my responsibility to instill in my child whatever knowledge I might possess about life. Since Laila's birth, I have realized that being a mom consists just as much of filling the role of teacher as being the student. Because of Laila I have learned to take the negative in life and see the positive. For example, I have never appreciated four hours of sleep as much as I do now. Laila has reinforced to me the importance of family and never taking for granted the people that are in my life. Most importantly, Laila has taught me to respect my mom in a way that I never thought was possible. I now know what it is like to love another person in such an all consuming unconditional way. Elizabeth Stone once wrote, "Making the decision to have a child is momentous. It is to decide forever to have your heart go walking around outside your body." If Laila has taught me anything, that is the one truth about motherhood I know.
Posted by Ali at 12:14 AM