16 Days of Awareness: A Parent of a Special Child - Alyssa and Everett's Story

"Becoming a special needs parent feels like being pushed in to the deep end of a pool, and you don’t know how to swim. So you kick frantically, gasp for air, and fling your arms hoping to find something –or someone- to hold on to. Suddenly, because your survival depends on it, you figure out how to float.”
–ellenstumbo.com

It was a gift when I finally found other parents with children like my dear Everett. This quote was one of the first things that I remember seeing on the hypotonia group page. I immediately saved it. It described my feelings exactly. My journey in a world unknown.

I had no idea how much our family would change after having our second son, Everett. When he was born, Everett had a very short umbilical cord. So short, that he couldn't be brought up to my chest. He had to lay on my tummy. His fingers were all tightly squished together in an unnatural position with his thumbs tucked inwards. He didn't attempt to move them normally either. He cried with any movement. Everett preferred to be still.

As the pediatricians made their rounds, they pointed out his fingers. They were concerned. We even had a consult with the orthopedic surgeon on staff regarding the issues with his hands. Our first visit to the pediatrician’s office made me cry. Our pediatrician talked about a possible syndrome. I cried so hard my shoulders were shaking. I sobbed. He saw characteristics that led him to believe that we needed genetic testing. Our hypotonia journey started with Everett being less than 2 weeks old. From that day on, we were doing testing and treatment. He had hand therapy at the local hospital. He saw the chiropractor weekly. Everett started OT and PT at only 8 weeks old.

At 12 weeks, my maternity leave ended. If you could call it a leave. All I did was worry and attend specialist visits and therapy appointments. It was hell at times. But, somehow, by the grace of God, I was able to endure. We had so many people praying for our family and our little champ.

At some point after returning to work, I was talking to my mom on the phone about how I just couldn't handle it all. I was completely overwhelmed. Working full-time, attending appointments, doing exercises with Everett at home. She was reassuring me that I was doing a great job. She was comforting me saying that most parents feel overwhelmed at times. I had two children now. Not one, which was already a big change, but now, I also had one with special needs.

I have a child with special needs?...

Yes, Everett has needs that are special. Not every child has what he has. So, yes, I guess I have a child with special needs. Everett is not typically developing.

That sunk in deep that day. It was the first time I had really thought about it.

I had to find other parents out there on this wild ride. I had to. I prayed to God that he would allow me to find moms who knew what I was going through. I needed that support. I felt lost.

I received messages from three women in the next two days talking about their children’s therapy experiences. They also expressed their prayers for us. God sending me love and encouragement through other moms.

A month or so went by, and I found a wonderful group on Facebook with other parents whose children have hypotonia. It was like coming home. I immediately felt a connection with the moms sharing their journey. We all have different stories, but share a common bond.

God had a hand in guiding me to that group. No doubt. He still guides me today. The power of prayer has been realized in Everett. I've never felt it so strongly in my life.

Everett continues to show us every day how small steps can lead to big success—each inchstone at a time. I am definitely a parent of a special child.


Check back tomorrow for a new story, a new journey, and a new message of hypotonia hope! 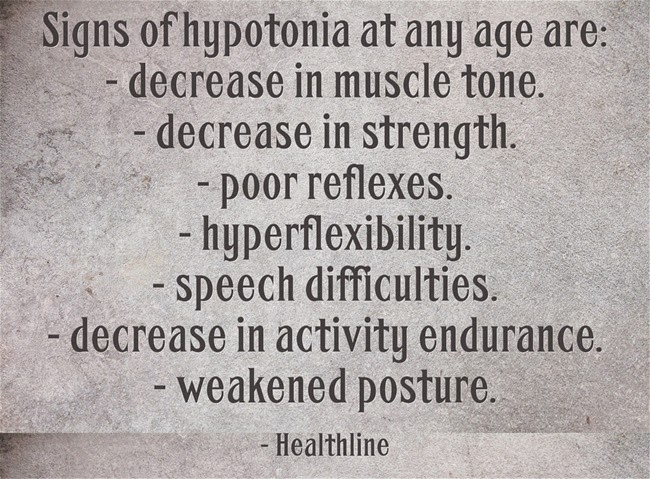 Alyssa is a mom of two beautiful children and a speech pathologist. She currently resides with her family in Illinois.

Email ThisBlogThis!Share to TwitterShare to FacebookShare to Pinterest
Labels: Hypotonia