When my husband and I had been married five years, we were blessed with our daughter.  For her privacy, we will call her Shellie.  This is a small part of her story.

The day she was born, Shellie was so limp and weak, a nurse said she had never seen a baby with such a weak neck!  And after fourteen days in the NICU, some oxygen, and a blood transfusion, Shellie came home.

She laid around for weeks.  We would hold her for hours trying to feed her.  She ate so slowly due to her weak mouth muscles; it would take a whole hour for her to drink a small bottle.  She ate seven hours a day, since she drank seven bottles, and this was just so she could stay in the 20% for weight.  For a social butterfly like myself, this was very difficult.  I could hardly go anywhere for her first seven months because I had to pump her breast milk and then feed it to her since she was too weak to suck.  So we pumped and fed all day long -- for seven long months.

When Shellie wasn’t eating, we would place her on our chests to do tummy time and to bond with her.  She could not lift herself at all, even her head, until she was five months old.  After that, she began dragging her body across the floor, including her face, so we’d put down soft blankets so she wouldn’t get rug burn.  Slowly, at around nine months, she got to where she would crawl.

She still could not sit up.  She would lean to the side if you sat her up and would fall to the left.  So we would always prop her up.  One day when she was eleven months old she sat up, all by herself.  I was ecstatic except I wasn’t expecting it, and she was being changed on a twin bed.  Well, she sat up and fell to the left -- right off the bed.  Boy did that scare me!  I was right there and it happened so fast.  She was ok.  We’ve done scans since then and nothing happened to her from that but it was very frightening.  She just didn’t have the balance to stay sitting up even though she could sit up.  Even to this day at seven years old, she will lean to the left and I have no idea why.  There is no brain damage saying that her leaning should happen. 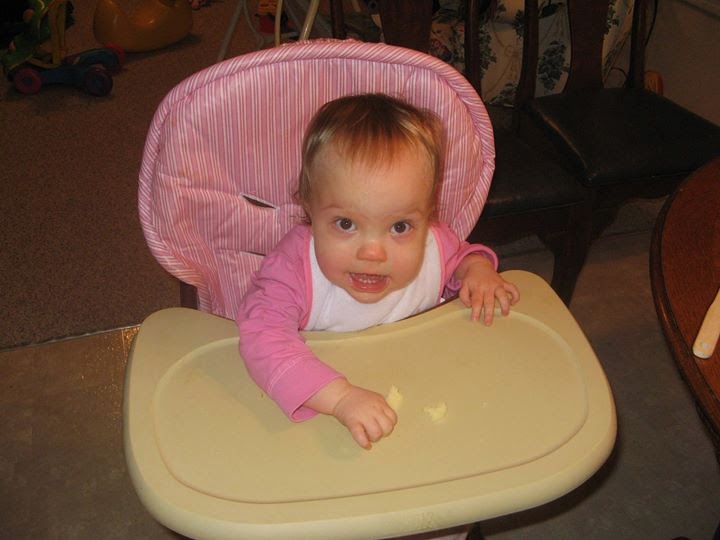 When she got a bit older we tried to help Shellie walk.  Her knees would buckle, and for a while she didn’t know what to do with her legs.  After she knew what to do, her knees still buckled along with her ankles.  We spent hours walking her around holding her under her armpits.  Boy, does that hurt your back!  But we wanted her to be able to walk.  We finally convinced her pediatrician when she was 19 months to refer her to PT.  She walked by herself at 22 months but was quite unstable.  She had been diagnosed with Autism at this point and was a runner. One day, as we were leaving the house,  I let go of her hand for a second and she ran toward the street.  The driveway has a little bump at the bottom, and she fell head face first into the pavement.  We were devastated and dropped everything to run her in for a CT scan.  She had terrible balance, and I soon learned after that from our new PT that she needed ankle braces.  Her balance was much better once we got those because her ankles didn’t turn in, or pronate, anymore.  She fell much less often, and her reflexes got better, so she would catch herself if she did fall.  She is seven and still wears cascade ankle braces.  We also enrolled her in behavioral therapy to teach her not to run from us.

Shellie also needed speech therapy too, due to her mouth muscles not being strong enough.  Chewing was a struggle for a little while as well.  We would massage her mouth using a z-vibe and spent lots of time having her blow through horns to strengthen her mouth muscles.  The speech therapist would teach us what sounds to work on to help her talk.  Many hours were put into her physical, occupational, and speech therapies.

I took her to play-dates.  I didn’t realize how different she was until I saw all of the kids running around and not falling without braces.  Shellie was also quite a slow learner compared to them.  We didn’t start play-dates until she was around 15 months, and the fact she couldn’t walk at that age really made her stand out.  It would make me very sad when we would go out with others, so we didn’t go a lot.  It was also a lot of work, because I had to help her walk to keep up with the others.

Shellie started in a 2 yr old preschool class when she was 3.  It was extra hard, because on top of the social delays, she also had hypotonia.  So playing with the toys and writing her letters was difficult.    For a while, all the kids’ handwriting looked like hers.  But then there’s got better.  Hers didn’t, because of her weak hands ,and the fact her hands are still the size of a 3 year old.  It’s harder when your hands are small like that.  But she also didn’t have the control of the other 3 year olds when all of them turned 3.  She has come such a long way since then and can write them now, but it took years of practice. 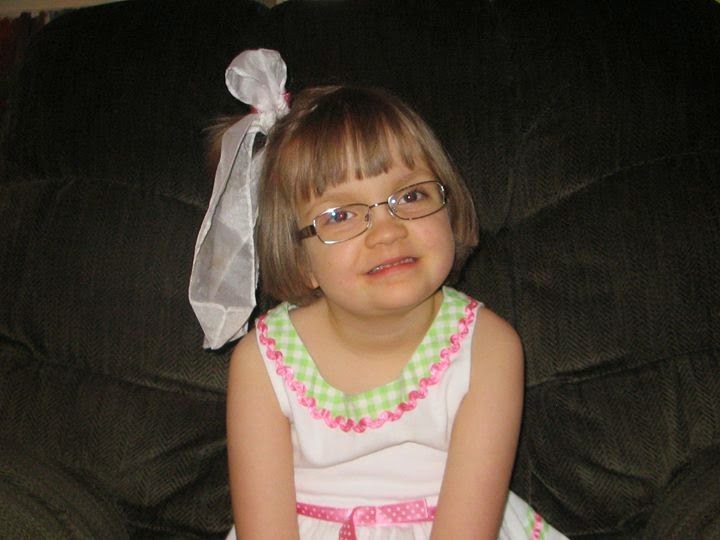 Although hypotonia isn’t in and of itself muscle weakness, it’s the people with both that get hit hard.  The kids that have low tone (hypotonia) and muscle weakness are the ones who need therapy and get left behind in things like sports, handwriting, and playing with all those neat 3+ toys with the small parts. Hypotonia and weak muscles also make for a tired child.  Shellie has always slept a lot.  She still sleeps 12 hours a night at 7 years old.  She has to go to bed at 6:30 pm to be able to get up at 6:15am to get ready for school and be there at 7:15am.

Shellie’s weakness has always been a whole body weakness, although some children with hypotonia and/or muscle weakness have weakness in a certain area of the body.  Even now we are working on her core muscle strength along with arms and legs.

We started OT around 2 years old, and we will be doing that for years.   I remember when we started taking her to therapy.  Anytime we’d go out it would be so hard because she was so big, and even though she walked at 22 months, she could not walk at a good pace without falling, so when we went to therapy or were in a time constraint I carried her or used the stroller.  Always needing a stroller was just a struggle;  I got a whole new appreciation for people in wheelchairs.  Always having to use the ramps and such really makes you have to put more time to do things.  I was so happy when Shellie got where she could walk well enough so we didn’t need the stroller. I still use a wheelchair for long distances and long days out though because her hypotonia causes her to be tired.

I remember the time I tried to teach her to use a tricycle.  First there was the teaching, because she has autism and learns so much slower than everyone else.  But after she knew how, she still couldn’t make it go unless it was on flat ground because of her hypotonia/muscle weakness.  We practiced a lot and she got where she could independently go from one side of a basketball court to another on a straight path.  I know because that is where we practiced-a church gym.  But even now at age 7 she still has trouble.  I just recently found her a tricycle with special handlebars that also help the bike move.  So she uses her arms and legs to move the bike.  She can finally go up a slight slant so she can ride around the culdesac and up the road.

I can honestly say the years have been long.  I would sometimes say, “Lord, please help her ___ and I’ll be happy.”  Then that would come to pass and I wouldn’t be happy.  I’d want more.  So I’d say it again with my next request and so on and so forth.  Slowly but surely, my requests would be granted, but even today I long for Shellie to be able to keep up with her peers.  Her other diagnoses hinder her as well, but if she just didn’t have the hypotonia, things would be so much easier.  The good news is that Shellie is a hard worker and is such a happy child; it makes therapies and all the hard work easier.  It is hard on my husband and I, but we love her and help her the best we can, and really that’s all you can do.  Sometimes you just have to take lemons and make lemonade. 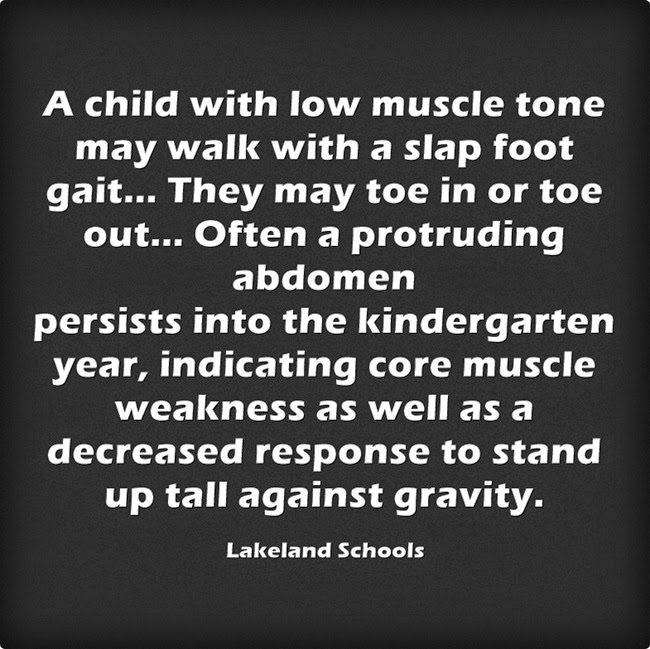 Check back tomorrow for a new story, a new journey, and a new message of hypotonia hope!

Amanda Powell is a graduate of Georgia Southern University and a stay at home wife of 12 years.  She and her husband Scott reside in South Carolina with their daughter with special needs which include but are not limited to hypotonia, autism, and epilepsy.
Posted by Ali at 9:29 PM

Email ThisBlogThis!Share to TwitterShare to FacebookShare to Pinterest
Labels: Hypotonia