Act of Kindness #2: Warmth Can Be Found in Even The Coldest Places

I believe that in even the coldest of places, warmth can be found.  I have to believe this, because if I don't, if I doubt this for even a minute, my world becomes a much more sad place to exist in.

As a child, I spent much of my time in a cold place: the hospital.  Why?  Because my father was dying from Hodgkin's.  Some of my earliest memories are of hospital masks enveloping my five year old face, the smell of hospital food lingering in the room and sauntering out into the hallway, the sounds of numerous machines beeping in the background: a lonely soundtrack, the feel of hospital rooms: solitary, institutional, cold.

I must add that this has nothing to do with the staff.  In my experience, the hospital staff, especially at Cardinal Glennon have been absolutely amazing.

Even so, I hated the hospital.  I saw it as a place of misfortune.  It was a home to grief, to sickness, to death, to heartbreak.  Where bad news and broken dreams run rampant. It was the place my dad went to in ambulance and never came back from.  It is a place that, like most people, I never want to spend my time in. 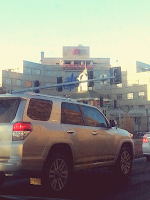 However, that's not what was in store for me.  The last year I found myself frequenting the hospital, doctor's offices, and labs all too often.  I was back in a cold place...a place I didn't want to be, a spot I didn't want to belong in.  I've seen children sicker than a child should ever have to be.  I've heard the sounds of a mother's painful sobs echoing through the halls.  I've felt the coldness.

My mom used to say that, "God gives heavy crosses to people who are strong enough to bear them."  I believed in the saying,"God only gives you what you can handle."  Now, I don't.  No, instead, I think God gives us more than we can handle...to test our faith, to prove to us how strong we can be when we rely on Him.  At least, that is what happened to me.

Today found me once again in that cold place: the hospital.  Except, this time, I decided I was going to change what the hospital meant to me.  No longer would it be a place of disappointment and despair.  Instead, I was going to bring some warmth to a place that had, for so long, felt so cold to me. 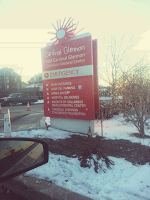 My Act of Kindness was very simple.  I placed a five dollar Starbucks gift card and a note into an envelope and left it on the windshield of a car in the hospital parking lot.  I do not know who the car belonged to, why he or she was at the hospital, or what type of mood he/she was going to be in upon returning to the car for the commute home. 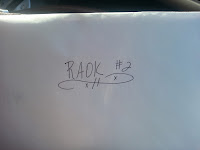 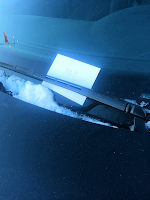 All I know, is that when you are leaving the hospital, you are either in a really good mood because you got some really great news...that is what we are all hoping for, or you are in a really bad mood because the news you got, isn't what you wanted to hear.  Either way, a nice note and a Starbucks card isn't going to make life any worse.

No, I hope that maybe...just maybe, this act of kindness brought a little warmth to a place that can be cold. 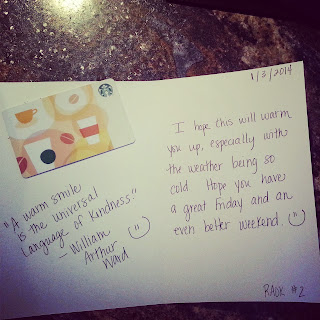